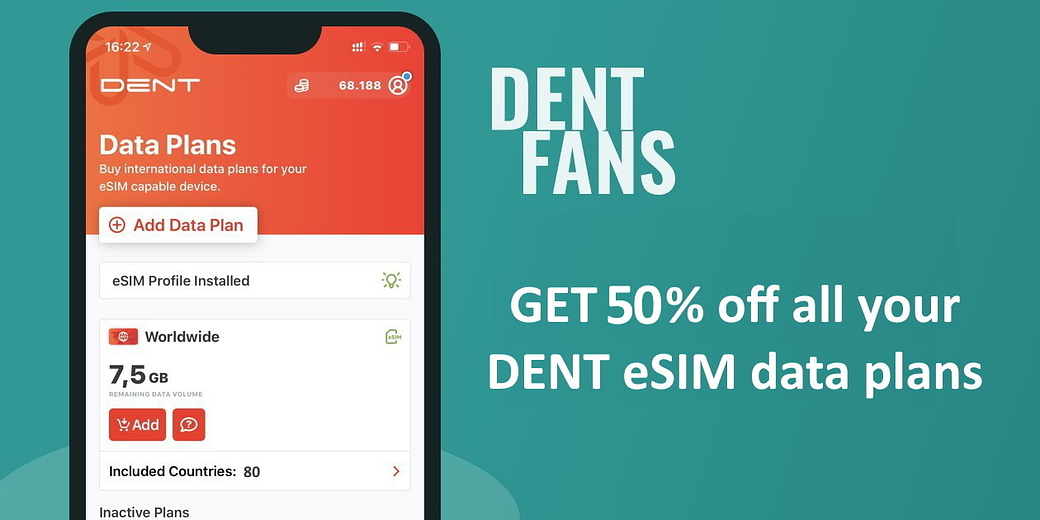 How to get 50% discount on your DENT eSIM mobile data plan?

But what if you don’t need these free minutes?

Well, if you don’t need them, these free minutes will expire after 30 days.

And you can’t share these minutes or sell them to others.

We stripped these voice minutes out of the plan, and we can now offer you the DENT eSIM data plans with a 50% discount.

However, as we bought a bunch of data plans almost half a year ago, the remaining validity is 180 days.

Hence, you’ll get the regular DENT eSIM Data plans of either the 3GB or 10GB (but without the free minutes), with a 50% Discount and validity of 180 days.

As we are using DENT TEAMS to allocate the data to our fans/clients, the delivery of your DENT eSIM data plans is via email (with inside the QR Code and instruction how to activate the data plan).

So, you can use your DENT eSIM data plans as any DENT App user with all DENT App features and benefits.

Or you can install, activate, and use the data on any eSIM enabled device (smartphones, iPads, or tablets) without having to use the DENT App at all.

So, this is the perfect deal for those of you who already have the DENT App installed (and already used their free data trial or one-time “try-and-buy” deal), but who don’t need the free voice minutes, and just want to get 50% off.

(For those of you who never installed the DENT App, check out this awesome introduction deal for new users)

You can choose out of two DENT eSIM worldwide data plans (180 days validity):

Just click on the buy button to purchase your favorite plan. 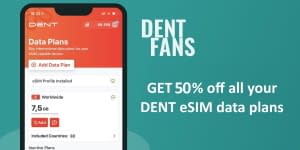