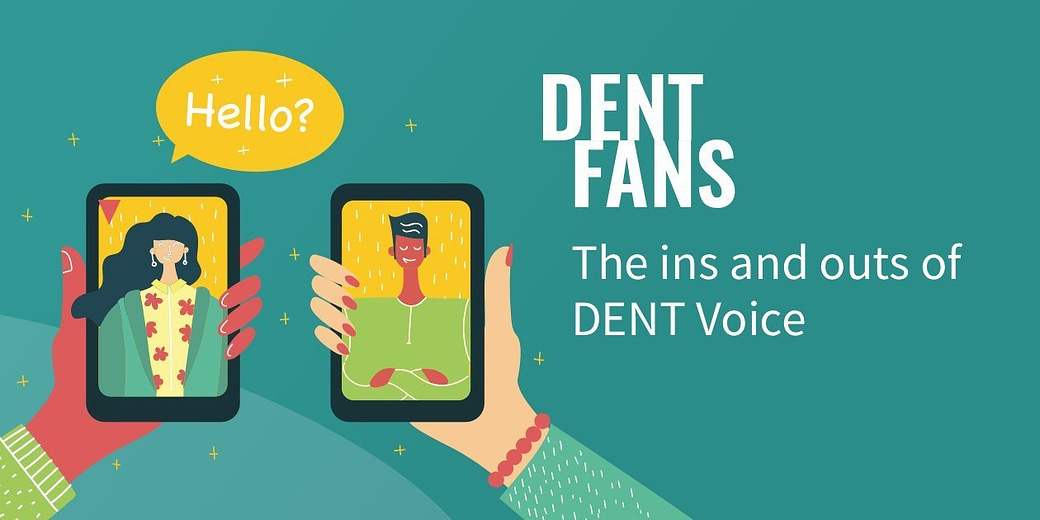 DENT Voice (aka DENT Global Voice Calling) allows you to call any number in 141 countries: mobile or landline numbers, service hotlines, and helplines by using the DENT App. And it doesn’t matter where you are (at home or abroad) as long if you have internet access.

You can buy bundles of 25, 50, or 100 minutes for each of the 141 countries. The rates are often cheaper in comparison with what your local provider charges you.

And still the person you call sees your complete phone number and can save it for a possible callback.

How is that possible?

Well, DENT Voice uses a special VoIP technology with lower costs for the connection from where you are to the operator who connects the last part of the connection (mobile or landline) to the one you are calling.

Hence, you need an internet connection to use DENT Voice, and yes it takes some bandwidth and data but only very small pieces. So overall, you are (usually) still cheaper than calling via your own telco provider.

You can call with your smartphone, or with your iPad, or any other mobile device, as long as you have internet connection and a “phone call” feature.

As telcos worldwide do charge different prices, the pricing for DENT Voice do differ much. Some countries are super cheap, while others charge relatively high costs.

There is one restriction, the voice bundles expire after 90 days from the moment you start calling the first time.

Tip: by using the DENT Afterburner Loyalty program, you can get free Voice minutes each 2 weeks. The more you deposit, the more benefits and free minutes you’ll get.

The program starts with 31 minutes but you can get up to 450 free minutes every 14 days. And the best part…

You are free to choose to whom or which countries you want to call. There is only a maximum of 5 countries to which you can call each 14 days. But for most of you, this will be sufficient.

And in case you want to call to someone if you already have called to 5 other friends in different countries, you can always buy a bundle for that specific country (of course, be smart, and use the Afterburner free minutes for the “high-fee” countries).

Also, the deposit into the Loyalty Program can always be unlocked (after 30 days) and you can use the DENT inside your DENT app balance for other purchases (note: as with all deposits into the DENT apps, you can’t withdraw them to external wallets – unless you have also access to DENT Exchange).

So, by using the Afterburner, you are actually paying nothing for your international calls. And the only “risk” you take, is that the price of the DENT token will decrease over time. That said, you can keep the DENT inside the Afterburner Vault as long as you want. And of course, the opposite can be true and the DENT token can increase in value, and that allows you to buy more telco products inside the DENT app…

How can I see how much free minutes I still have?

This feature is a little “hidden”. But if you just enter a telephone number in the Voice Tab (that you want to call), you’ll see the number of minutes available. (Or if no minutes left, you’ll be directed to a voice bundle that you can purchase).

The free voice minutes have a 30-days validity (from moment of purchase of the eSIM data plan).

How to start with DENT Voice?

Inside the DENT App, select the Voice Tab (see image above), and just enter the telephone number you want to call…

And if you have (free) voice minutes available for that country, you can call right away.

If you don’t have minutes left, you’ll see the option to buy voice minutes.

Instead of entering a telephone number, you can click on “See all Countries” and select the country you want to call to, where you’ll see the available bundles (25, 50, or 100 minutes) and prices.

If you have still free Afterburner minutes left, you can’t buy via this “all countries list”, but you have to enter the phone number you want to call, and go on from there.

(Note: as it loads 141s countries, it can takes few seconds to load this page).

What about the quality of DENT Global Voice Calling?

The quality is excellent, and you and the other person you are calling with can hear each other very good without any noise. But just try it out yourself.

What else should you know?

If you are using a VPN to access the internet, DENT Voice won’t work as it can’t trace the place where you are calling from. Just switch your VPN settings off, and you can call (again).

So, DENT Global Voice Calling is a great (but yet unknown by many) feature especially interesting if you are taking advantage of the Afterburner Loyalty Program and use the free voice minutes.

If you’ll need more minutes, the rates are often cheaper than with your local telco provider.

And yes, you can use chat programs as Skype or WhatsApp, but the one on the other side, has to use these chat programs as well. And there are many cases where people don’t have internet access, don’t use chat applications, and/or don’t have mobile phones, but just have landlines. Think about elderly people without internet access who prefer to call via landlines (as the receiver doesn’t need to have an internet connection, only the caller needs this connection).

As it’s not in line with liberation and disrupting the market, we would like to see a longer duration, extended from the current 90 days to 365 days (just the same as with the eSIM data plan duration).

But preferable, we would like to see that voice minutes are offered in the form of a “Pay as you go” model. Hence, postpaid directly after usage, and where users do pay with DENTs.

Of course, before a voice call can be done, the user should have a certain minimum of DENT in his balance, but with the main advantage that DENTs can’t expire.