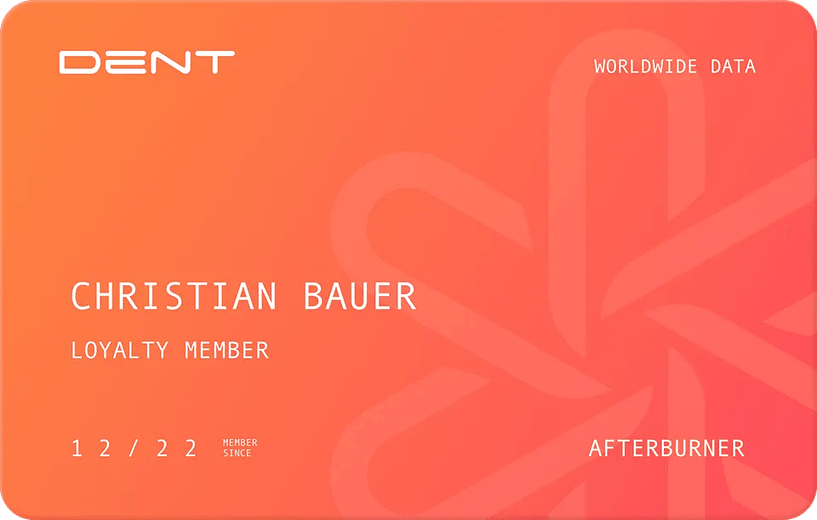 DENT Afterburner Loyalty Program. Features, benefits, restrictions, differences between DENT App and Exchange users, future and wanted features, and anything else you need to know about DENT Afterburner.

What is the DENT Afterburner Loyalty Program?

The DENT Afterburner is a loyalty program, in which DENT App users and DENT Exchange users can deposit DENTs into a personal vault and enjoy a variety of loyalty benefits. By locking some of your DENTs, you’ll receive higher daily rewards within the Earn tab, higher referral bonuses, reduced trading fees and free voice minutes. There are three different membership levels, White, Red, and Black, offering different rewards.

Who can use the the DENT Afterburner Loyalty Program?

Any DENT Android App or DENT Exchange user can become a member of the DENT Afterburner Loyalty Program.

Note: the Afterburner Loyalty Program (AB) can only be used with an Android mobile phone. Unfortunately, the AB is not available for iOS devices as it is against some of Apple’s Terms of Services (for iOS Apps).

What benefits do you get as a DENT Afterburner member?

As a DENT Afterburner member you get some excellent benefits:

How much benefits you’ll get depends on the number of DENT you deposit (lock up) inside your Afterburner Vault. The more you deposit, the higher the rewards.

Depending on your level, you’ll get an image with your Membership Details on it (see for an example on top of this post), but it currently has no other “value” than a gimmick, an image that you can share among your friends (to impress them?), but who knows… maybe in the future you can use the card for new benefits?

Note: the benefits are subject to change and can be adjusted by the marketing team any moment. That said, above benefits didn’t change last half year.

Furthermore, it is possible that the Earn Tab is not available for certain countries as there are times when there are just not enough advertisers for the daily video ads. Of course, in that case, you can’t earn any rewards and won’t receive the extra “AB Benefits” percentages.

The name Afterburner is a little bit confusing. This term is often used by cryptocurrencies where you can stake/deposit a certain amount of tokens and get the tokens itself as kind of interest. The AB Program is a loyalty program for users, and as a user you’ll get the above described benefits.

This is how it works…

How to use the Afterburner Loyalty Program inside the DENT App?

Inside the DENT App go to your “My Account” and select the Afterburner button. Now you’ll see a short description and overview of the benefits…

Just hit the Get Started Button and deposit a certain number of DENT into your Afterburner Vault. The DENT is locked up for 30 days, and you’ll get access to your benefits immediately.

How to upgrade, downgrade, or cancel?

If you want to upgrade your benefits, you can always add more DENTs to your vault. Just go to your Afterburner Membership Overview screen and select “Change Vault Balance”. You can choose the amount you want to add using the slider.

The same process for downgrading your current membership level. But please keep in mind the minimum lock time in the vault is 30 days. Once 30 days have passed from the initial lock-in, you can downgrade and withdraw your DENTs to your main balance.

To cancel your Afterburner Membership, go to Account Overview, choose Afterburner, and select “Cancel Membership”. As long as the minimum of 30 days has passed from your most recent membership level upgrade or initial lock-in, you can select “Cancel & Withdraw”. The DENTs from your vault will be credited to your main account balance.

What happens after 30 days – the lock-up period?

After 30 days, you can decide to just let the DENT inside your Afterburner Vault, or you can withdraw the DENT back to your balance inside the DENT App anytime you want.

Note: as with all DENT tokens inside the DENT Apps, you can only use them for telco services offered by DENT Wireless. The DENT App is not an wallet, and you can’t withdraw DENT from the DENT Apps to an outside wallet. Only in case you have access to the DENT Exchange (see below), you can withdraw your DENT (after the lock-up period ended) from within your DENT Exchange dashboard to an external wallet.

(Your DENT Exchange and DENT App user accounts are interconnected and you use the same login username (your mobile phone number) and password, and you can see your AB details in both applications)

What happens if I withdraw a small amount instead of the whole AB Vault balance?

Well, your benefits will decrease to the lower level (i.e. the benefits belonging to the new DENT balance amount).

How to use the Afterburner Loyalty Program inside DENT Exchange?

Of course, you’ll need first access to DENT Exchange. Unfortunately, due to different legal policies with respect to cryptocurrency exchanges, this access is restricted to inhabitants of 43 countries. So, check the DENT Product Availability Matrix before you try to register.

So, if you live in one of these countries, you can register yourself for DENT Exchange access, and you have to pass the so-called KYC procedures (Know Your Customer) that can take some days and depends if you deliver all necessary information (as a copy of your passport) the right way (and respond quickly with respect to possible questions).

Furthermore, the process is more or less the same as with the DENT Apps. Just click on the Afterburner button, and select the amount you want to deposit.

1) the feature to withdraw DENT to any external wallet address you want (or transfer it back inside your DENT Exchange balance for trading activities). Of course, you can only withdraw after the lock-up period ends. But especially for long-term DENT token investors, this is a great feature as you can deposit up to almost 10 million DENT and get all the benefits… especially the 450 free Voice minutes each 14 days is a great bonus… and after 30 days, you can unlock and withdraw your DENT anytime.

2) the feature to deposit more than 2 million DENT up to almost 10 million. Hence, more or higher benefits than the maximum benefits related to the maximum 2 million deposited DENT in the DENT app.

3) If you have an iOS (Apple) mobile phone, you can still become a member of the AB Loyalty Program, but you can’t get the extra daily video watch rewards as the Earn Tab (aka Offer Wall and Surveys Wall) is not available for iOS users (creating apps that give rewards is against Apple’s Terms of Services).

Are there any risks by depositing your DENTs into the AB Vault?

Not really, just a few small ones…

First, the future price of DENT can go up or down, and the products you can buy within the App can change over time (in product supply or in price).

Also, the benefits (number of minutes or extra reward percentages) can be altered by DENT Wireless anytime they want… in your advantage or disadvantage… but maybe DENT Wireless will even add more benefits as well in the near future.

However, at the moment, the benefits are awesome and far outweigh the minimal risks.

So, it’s a no-brainer for me, and I’ll advise you to try this out by buying 30K of DENT (for about $6.00) and deposit the DENT into your AB Vault, and see for yourself how easy it is to call your friends abroad (or even within your own country).

One of our community members has made a video explaining all DENT Afterburner benefits, for those of you who prefer to watch a video instead of reading text…

Note: at May 2, 2020 the moment this video was created the DENT token price was $0.00013. Probably, when you watch this video, the price will be different.

In our Telegram group we often discuss what DENT Wireless can do to stimulate the Afterburner Program even more. As we know and hope, the more benefits, the more users use the program, the more DENT is locked and out of circulation, and can result in a higher DENT token price.

Of course, every addition or improvement of the Afterburner Loyalty Program is highly appreciated. Think about:

(Note: as per the new roadmap (Q4 2020), there will be eSIM benefits added to the Afterburner, but we don’t know yet what kind of benefits).

As the Afterburner Loyalty Program is a program for “loyal” users , and preferable for users who actually spend “money” and buy products. So, logically, the more you buy… the more benefits you’ll get. But not the other way around… by giving away as much as possible to Afterburner users, but without DENT Wireless getting any income in return… Or to say it in other words… just adding extra free products, as for example, free mobile data (or even free DENT as kind of staking reward), doesn’t help DENT Wireless to earn more income. So, these extra proposed free additions to the Afterburner, are no real option (except for some smaller additions).

But overall, we really like the DENT Afterburner Loyalty Program, and invite you to become a member. Everything works smoothly, you’ll receive access to your free Voice minutes, and all discounts and extra free DENT for referrals and rewards are calculated properly and added to your balance.