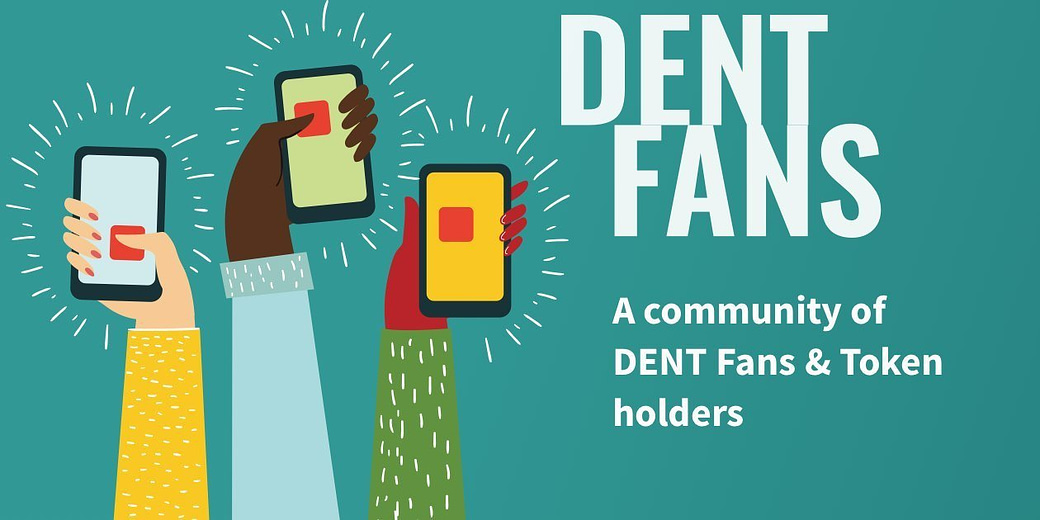 Let us introduce ourselves.

We are a community of DENT fans and token holders who discuss and chat with each other in our Telegram Group – DENT Fans.

“To disrupt and liberate the mobile data market and create a global marketplace using blockchain, where everyone on this planet has the opportunity to buy, sell, share (pool), and transfer mobile data packages between each other.”

For us (as Fans) this means… A market place with “fair” prices without unnecessary barriers and restrictions (as long-term contracts), and/or high costs (as international roaming costs), or inefficient and time-consuming procedures (as changing SIM cards or need to visit a store (instead of using the internet).”

“The telco industry is a complicated, fragmented mess and so 1990’s. There are a handful of telcos in each country, isolated silos that don’t interoperate properly with each other on the mobile market. Telco users are stuck in a trap, where their purchased data packages expire every month, even if they paid for it. We are striving to liberate it, while creating new opportunities for telcos too.”

We as Fans really like Steve Jobs quote, and want to put a dent in the universe ourselves…

To help and contribute to the DENT team with their mission and vision.

We think mobile data and easy internet access is a “basic need” for anyone on this planet, just like water, food, health care, and energy.

Disclaimer: No affiliation or relationship with DentWireless Ltd:

As we are a “community”, in the daily chats we often have to explain or refer to “basic” information. But it can be annoying to see the same explanations or questions over and over again.

So, we wanted to have a place where we can refer to with all necessary information about the DENT products and DENT token related subjects. This website has the objective to achieve this goal and is the place where…

We target 3 groups of audiences:

Of course, we advice you to visit the official DentWireless.com website, but our Fans website has a broader goal…

For the DENT users we go into much detail about all current products. Think about the purpose, features, benefits, possible shortcomings, upcoming features, wanted extra features and improvements, and answers on frequently asked questions about the product.

Besides the distinction based upon different types of mobile operating systems (Android, iOS, Samsung Galaxy), and distinction between DENT Apps and the DENT Exchange, it depends on your situation whether or not you can use all these features:

Below the links to all current DENT products (as described and analyzed in-depth on this website):

Note: these posts above are continuously updated with the latest updates or insights.

In our DENT “product” articles, we often end the article with wanted extra features. Of course, we hope that DWs management will introduce, or at least will consider our wanted features.

Also inside the “token” and “marketing” articles, there are many tips and recommendations about how DW can improve the products, marketing, and/or tokenomics.

We base our articles on publicly available information and often have to make assumptions without knowing all the details.

Especially, with new upcoming products or features, we have to make guesses how these will look like in the future. Based upon these guesses and common knowledge, we try to predict the possible effects.

We don’t look just at the positive effects, but also take into account the possible negative effects.

Just as with the existing “product” features, we’ll discuss the “good”, the “bad”, and the “ugly”.

The idea is not to spread FUD or negative information. However, if we don’t like something about the (current and future) products and policies (especially viewed from a DENT token holder’s viewpoint), we give our opinion and arguments about what we think can be improved and what we want the management to change.

This website is our “mean” to “talk to” DWs management. Even if the team doesn’t respond to all our recommendations (and sometimes “worries” and “frustrations”).

So, although we are DENT Fans, we are also critical, and we are always looking for ways to improve the products, marketing, and token economics.

We believe in “transparency” but we can understand that the team doesn’t want to discuss with us “in public” about all possible improvements or made choices.

Of course, we understand that sometimes the team prefers to keep (part of the) information “secret” as they don’t want to inform their competitors about all the (strategic and marketing) plans.

On the other hand, we as DENT token holders, of course, to “advise” the team and make proper investment decisions, we want as much (background) information as possible.

Therefore, we made a list of all questions we would like to be answered by the team, preferable via an AMA session.

We hope that members of DWs management and marketing team will have a look at our website once in a while and will internally discuss our “proposals”.

But of course, DWs team members are always welcome to discuss these items in our DENT Fans Telegram Chat Group.

Disclaimer: The content on this website is for informational purposes only, you should not construe any such information or other material as legal, tax, investment, financial, or other advice. Nothing contained on our site constitutes a solicitation, recommendation, endorsement, or offer by DENT Fans to buy or sell DENT tokens or any securities or other financial instruments.

As we discuss the progress in our Telegram Group, we often don’t use comments on our blog posts. But of course, you can comment by replying to tweets on our Twitter Page or post messages inside our Telegram Chat Group.